A community from Nature Research
Contributor Scientific Reports
Behind the Paper

The brain can serve as a template for the next generation computing architectures. Our proposed hybrid neuromorphic architecture utilizes MoS2 based synaptic memtransistor, and exploits random device mismatch of transistors to implement the population coding scheme present in the nervous system.
Chetan Singh Thakur
Assistant Professor, Indian Institute of Science (IISc), Bangalore
Follow
Like Be the first to like this
1

The evolution of Internet-of-Things (IoTs) and edge devices in the areas of ubiquitous learning, sensing, and human-machine interaction is increasing dramatically. These devices demand integrated intelligence in low power, small area, and computationally efficient hardware [1]. However, there are several limitations in conventional computing systems based on the von Neuman architecture. Conventional computers are often unable to manage the variability of data obtained in the real world and thus have traditionally been weak at tasks such as data prediction and classification. On the other hand, neurobiological processing systems are remarkable computational devices. Their basic computing elements, i.e., the neurons, are slow, heterogeneous and stochastic in nature, and yet they outperform today’s most powerful computers at real-world tasks such as vision, audition, and motor control. When compared with digital computers, the brain consumes much less power (~20W) and is highly adaptive. The loss of merely one transistor can wreck a microprocessor, whereas the loss of neurons does not affect the functionality of the brain [2].

The brain can serve as a template for the next generation computational architectures. We have proposed one such hybrid architecture based on neuromorphic population coding [3], where encoding of information is carried out by the activity in an ensemble of neurons such as in the olfactory, motor, and visual cortex. Our proposed hybrid architecture [4] utilizes a CMOS-based silicon neuron as a basic computing element, and molybdenum disulphide (MoS2) based two-dimensional synaptic memtransistor as an analogue memory, instead of conventional digital memories, to avoid bottleneck in terms of power and area. Two-dimensional (2D) materials form a perfect candidate for such hybrid approach since they are immune to short channel effects while demonstrating a wide range of electronic properties. A combination of silicon technology with 2D materials can surpass the current technology limitation and can offer remarkable advancements in circuit architecture and device performance at atomic levels. In this regard, we propose a biologically inspired wake-up system [4], shown in Fig 1, with embedded intelligence and energy efficient footprint, that can be integrated with existing edge computing devices to improve their energy and performance. This system exploits the inherent mismatches present in lower silicon technology nodes to reduce computational complexity and simultaneously uses multi-state memtransistive device for low power computation and reduced computational complexity. The memtransistor used in this work is a 2D counterpart of a floating gate memory which is fabricated from a single crystalline MoS¬2 nanosheet. It utilizes temporally confined charge tunneling between the channel (MoS2) and the floating gate to attain multiple conductance states and demonstrates properties similar to those of a biological synapse [5]. In the current hybrid framework, this synaptic memtransistor memory provides two functions simultaneously, one a substitute for digital memories as an adaptable multi-state memductance and the other is the execution of an inherent multiplication operation by Kirchhoff’s current law (KCL), thus offering a low power computational paradigm.
This framework showed promising results for demonstrated regression and classification tasks [4], thus proving to be a step closer toward designing low power, smaller dimensions, fault-tolerant, and robust architecture. These characteristics enable the framework to be employed in onsite processing of data such as in IoT devices, edge devices, energy- and area-constrained devices.

Acknowledgment: A detailed explanation of the system can be found in our recently published paper at the Scientific Reports [4]. We acknowledge all the co-authors of this published paper for their contribution to the blog.

Mario Lanza
about 3 years ago 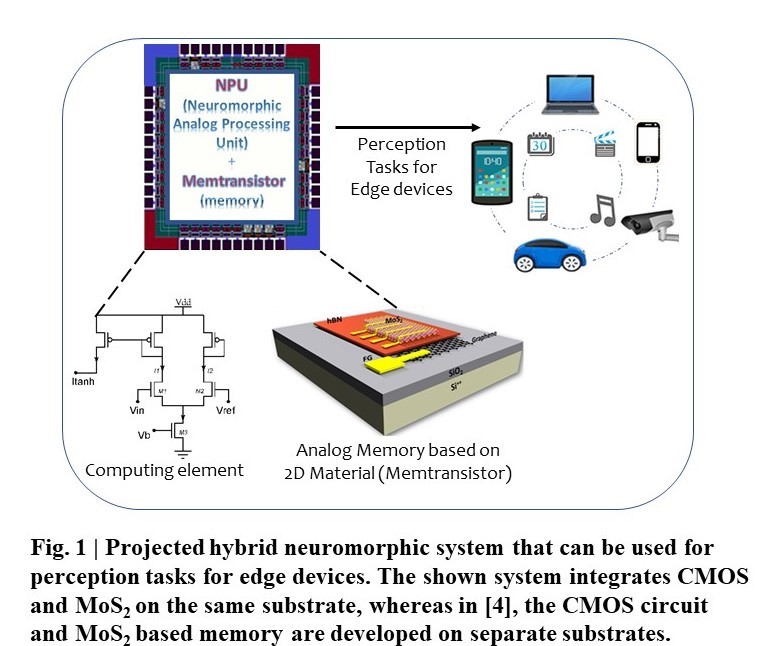 The brain can serve as a template for the next generation computing architectures. Our proposed hybrid neuromorphic architecture utilizes MoS2 based synaptic memtransistor, and exploits random device mismatch of transistors to implement the population coding scheme present in the nervous system.