We developed an ultra-sensitive force sensor capable of measuring nanonewton friction and adhesion forces acting on a liquid droplet. The technique presented here will greatly inform future work on liquid-repellent surfaces and enable their rational design.

Since Thomas Young first introduced the concept in his seminal 1805 paper, contact angle measurements have become the gold standard to characterize the surface wetting properties. While the durability of his ideas partly reflects the insightful man Young was, it also reveals how little progress has been made in terms of tool development for wetting science. Certainly, much of the hardware used to measure contact angles has changed (and improved)—better cameras and more sensitive sensors. However, the basic measurement idea remains largely unchanged: place a millimetric-sized droplet (typically water or oil) and measure the angle it makes with the surface. An analogy to this unsatisfactory situation is if a scientist from the 19th century were to wake up one day in 2019 and find the microscope design largely unchanged, without the accompanying developments—such as confocal microscopy and superresolution techniques—that fueled the revolutions in modern biology

Motivated by this, we seek to develop a new tool, an ultra-sensitive force sensor capable of precisely quantifying tiny forces acting on a droplet as it moves on surface. We are inspired by two instrumentations, the atomic force microscopy and, in particular, the surface force apparatus; hence, the name we chose, i.e. the droplet force apparatus (DFA). The basic idea behind the tool is embarassingly simple. We attach a droplet to a flexible rod (or cantilever) with known flexular constant and as the droplet moves across/away the surface, the forces acting on it can be inferred from the deflection of the cantilever. Forces as small as 20 nN can be measured in this way

In our paper, we use the DFA to quantify the wetting properties of polyzwitterionic brush surfaces (A), which are known for their excellent oil-repellent properties under water, because of their ability to bind strongly to water molecules. In this hydration state, the friction force acting on a millimetric oil droplet is less than 150 nN, much smaller than other well-known liquid-repellent surfaces, such as the lotus-leaf effect surfaces (B). For a similarly-sized water droplet, the friction force is almost ten times larger, at about 9 μN. Adhesion forces can also be measured with minor modifications.

We have also integrated our DFA setup with conventional microscopy (in particular, reflection interference contrast microscopy) which allows us to look at the droplet's base (bottomview) and hence deduce its interactions with the surface. For example, on the polyzwitterionic brush surface, an oil droplet essentially hydroplanes on a thin water film, and the droplet’s base is free from pinning and hence appears smooth and circular (A). In contrast, on lotus-effect surfaces which are covered with micro-/nano-structures,the topmost tips of the structures act as pinning points, and hence the droplet's base is no longer circular (B).

DFA is highly versatile tool which will be useful both for fundamental research and in more applied industrial research, e.g. in studying the effect of surfactants in modifying wetting properties. Like its namesake, we hope that DFA will revolutionize the study of wetting forces and resolve many of the outstanding questions in wetting science. 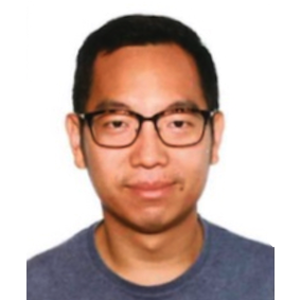