We have successfully combined silicon solar cells with singlet exciton fission - a way to get more than one electron for every blue and green photon from the sun.
Marc Baldo
Professor of Electrical Engineering, MIT
Follow
Like Be the first to like this
0

Sensitization of silicon by singlet exciton fission in tetracene - Nature

Many have tried to reduce these losses by building a second solar cell on top of the silicon cell. Perovskite materials, in particular, look interesting for this application[2]. The additional cell generates charge at a higher voltage and is designed to pick off incoming light with higher energy. But, as yet, these approaches have not made it to mainstream commercial silicon solar cells. It can be challenging to electrically match the two cells together, and adding the second cell can be expensive.

Dexter’s proposed solution was different. Instead of adding a second cell, he argued for turbocharging a single solar cell. He wanted to capture high energy photons and split them in two. If this idea could be coupled to a silicon solar cell it would produce two charges instead of one from a high energy photon. The peak performance of a silicon solar cell using this approach can be increased from about 29% to 35%[3]. That is a pretty substantial change for an industry that has ground its way from 14% in Dexter’s time to 26% today.

Dexter proposed to use ‘singlet exciton fission’ in a molecular material known as tetracene. When a molecule of tetracene absorbs light it generates an excited state that we treat like a particle, or exciton. The energy starts the process as a spin zero exciton or ‘singlet’. But in tetracene, the initial exciton rapidly splits into two new excitons that have half the energy of the original state. The product excitons are spin one and are known as ‘triplets’.

Fig. 1. (left) This is the singlet exciton in tetracene – as simulated by Yost, et al. Nature Chem 6, 492–497 (2014) doi:10.1038/nchem.1945. It is formed when the material absorbs light and is the initial state in singlet exciton fission. The wireframe molecules in the background are tetracene arranged in a section of a tetracene crystal. The purple and orange blobs represent the distribution of the electrons in the excited state. Note that it is spread out over two molecules. (right) These are the two triplet excitons in tetracene that are formed after fission. The two triplets can now move independently. If both can find their way to silicon and transfer their energy, it can lead to the generation of two electrons rather than just one. Calculation by Yost, et al. The scale bar is 3 Ångstroms, or 3×10-10 m.

We know a lot more about singlet exciton fission now than in Dexter’s time. We know that it is extremely fast (<1ps) and that it can be almost perfectly efficient[4]. We have also used exciton fission to generate more than one electron per incident photon, albeit in an organic solar cell, which isn’t a mainstream solar technology[5]. But the challenge of coupling exciton fission to silicon has remained. It has been the central focus of our work for nearly ten years within a research center sponsored by the US Department of Energy. We faced two main challenges. First, it was unclear if it was even possible to couple the triplet excited states in tetracene to silicon. We couldn’t get any guidance from theory because the interface between molecules and silicon is difficult to simulate. Effectively, we had to just try it and see. Second, we came to realize that the problem was all about the silicon surface. If that surface was bad and immediately destroyed any energy injected from tetracene, how could we ever know if we were on the right track?

The breakthrough for us came when Tony Wu and Markus Einzinger tried using very thin layers of tungsten oxynitride, and hafnium oxynitride, respectively, at the interface between the tetracene and the silicon. Suddenly, we started seeing characteristic properties of singlet exciton fission from the silicon. All silicon solar cells must protect their surfaces, but what was remarkable about Tony and Markus’s work was that the protective layers were incredibly thin – only 0.8nm. Any thicker and the excited states in tetracene can no longer couple to the silicon. Once we investigated these surfaces we found that they were aided by a fortuitous property. They generate a small amount of fixed charge that reduces losses by repelling mobile charge from the silicon surface.

Fig. 2. (left) The structure of the silicon solar cell that we coupled to tetracene. The electrical contacts are on the back. The tetracene absorbs incoming light and transfers energy to the front surface of the silicon. (right) Photos of the cell courtesy of Julia Kompalla.

We’re excited about this result because it shows that Dexter’s old idea can work. Scientifically, there is a lot still to do. The best protective material we have found so far is hafnium oxynitride. But we don’t understand whether it is special, and if so, why. We also don’t understand how the energy gets from tetracene to silicon. In tetracene the exciton is composed of a positive and negative charge. Do those charges move into silicon together? (This process is also called Dexter transfer.) Or do they move independently? If we understand this, we could improve the efficiency. Right now we estimate we are at 133%, or 1.33 charges per incident photon. That is enough to boost the performance of a silicon solar cell, but in principle, we could increase this to 200%.

From a technological perspective, Dexter’s idea only requires that one inexpensive coating of molecules is added to the top surface of the cell. We think it could be cheaper and more efficient in practice than the two cell approach. Right now, we have shown that the approach can work but our cells are still poor compared to commercial silicon devices. The tetracene does not absorb enough light and the silicon device is bad at converting energy injected from tetracene into electrical current. The next step will be to optimize silicon solar cells for coupling to exciton fission. We will be injecting energy into the top few atomic layers of the silicon cell. We need to carefully design that top surface.

Economically, solar cells are a far more important now than they were in Dexter’s day. Back then, the market was small and silicon cells significantly underperformed their potential efficiency. Today, silicon solar cells are approaching their thermodynamic limits. We think Dexter was prescient to focus on achieving ever-higher efficiencies in silicon. We hope that the demonstration of coupling exciton fission to silicon will inspire others to work on this fascinating and important problem. 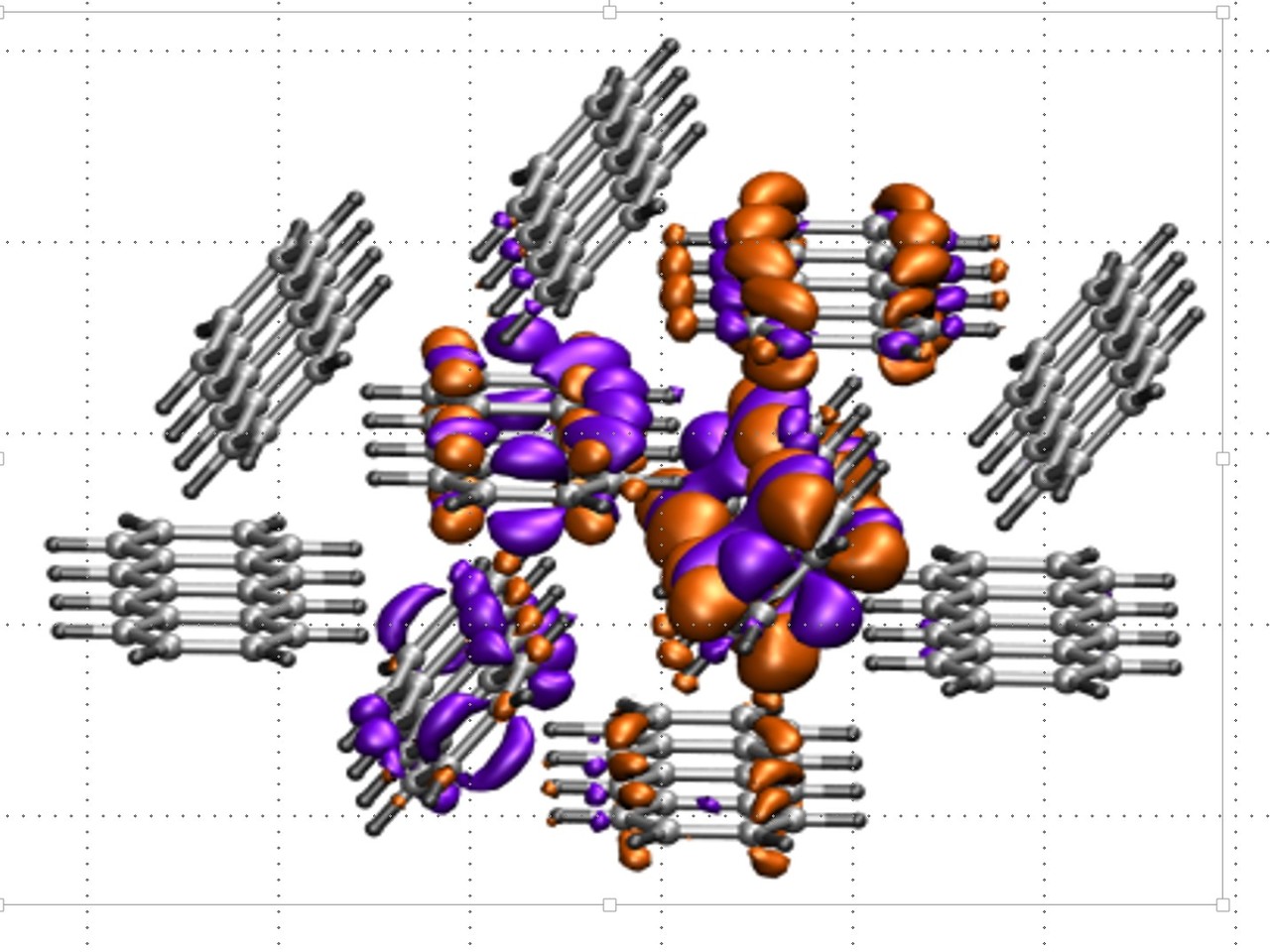 We have successfully combined silicon solar cells with singlet exciton fission - a way to get more than one electron for every blue and green photon from the sun.