Researchers at NIST investigate how charge navigates through the bending, shaking, and twisting of molecules
Emily Bittle
Physicist, National Institute of Standards and Technology
Follow
Like Liked by Elena Belsole
0

The electronic structure and transport properties of organic semiconductors are known not to follow standard semiconductor models and a complete understanding is still lacking in the literature. The authors experimentally and theoretically demonstrate the role of phonon–charge interactions on the hi…

Researchers at the National Institute of Standards and Technology (NIST) in Gaithersburg, MD have demonstrated a cross-disciplinary method to identify the molecular motions in organic semiconductors that lead to decreased electrical performance. Flexible electronics based on organic materials remains a topic of significant interest because device function and processability can be tailored through chemistry.  Organic light-emitting diodes (OLEDs) can be found in products ranging from cell phone displays to high-end televisions, and organic semiconductors have the potential for use as flexible solar cells and wearable electronics. The features that make these systems attractive for practical applications also present challenges to obtaining improved electrical properties.  In particular, the relatively weak bonds that hold the crystal together while allowing material flexibility present challenges to achieving delocalized charge transport; a physical property important for efficient electrical performance in conventional semiconductor materials like silicon.  How charge interacts with the many discrete and collective bending, twisting, and shaking motions of weakly bound molecules remains poorly understood, with few reports convincingly demonstrating the necessary coupling between predictive theory and experiment.  This presents a significant barrier to intelligently designing materials that minimize or take advantage of molecular motion.

The NIST research team, comprised of members from across several research groups, have demonstrated a cross-disciplinary measurement and calculation platform that can be used to assess molecular motions for their impact on charge transport.  They use Raman spectroscopy and transmission electron microscopy (TEM) to reveal phonons (collective molecular motions in a crystal) that are present at ambient conditions and compare this to the direction of electrical mobility within the crystal. Atom -based density functional theory is used to identify the phonons and model the impacts on electrical interactions at the molecular level. By correlating the direction of molecular motions with the direction of electrical interactions in both experiment and calculation, the researchers show the influence of particular molecular motions on final device performance. They demonstrate this method in single crystal tetracene and show that a bending motion related to one low-energy phonon has a pronounced effect on charge transport. This motion appears to be slowing down the flow of charge in the most efficient transport direction when compared to calculations of the static crystal structure. From modelling the electrical interactions during motion, it is observed that rows of molecules will bend toward each other causing an intermittent close interaction between two rows, and corresponding decreased interaction with the neighboring row. This breaks charge delocalization within the crystal into close pairs, interrupting the transport along the direction of molecular motion.

Charge transport can be used as a proxy for many molecular interaction-based processes important to device functionality, such as exciton and spin transfer, that will also be affected by molecule movements. Molecular design currently optimizes molecular ordering in the static crystal but does not consider the collective molecular motions that can be used to optimize molecule-molecule interactions. Understanding the influence of molecule motions on long- and short-range interactions that impact electrical performance, as well as photo and spin functionalities, will lead to better design control of molecules for emerging markets. By combining directionally oriented physical measurements of phonons, electrical measurements of charge transport, and calculations, NIST researchers have demonstrated that understanding of the impact of molecular motions on device function can be found. 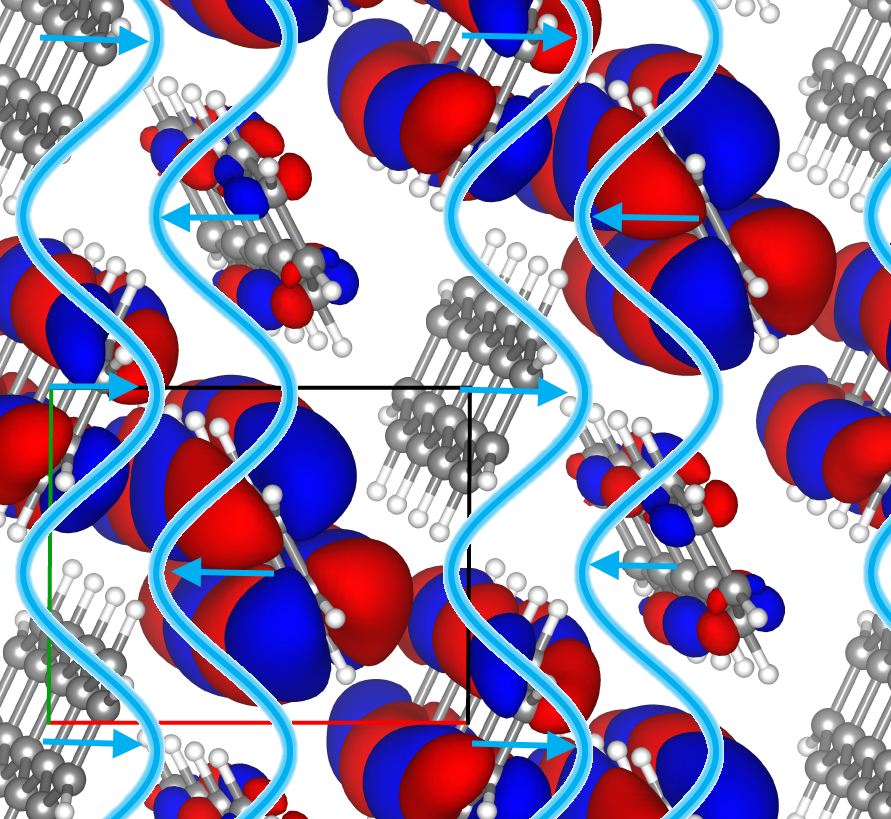 Researchers at NIST investigate how charge navigates through the bending, shaking, and twisting of molecules