Scrambling quantum information is an intriguing process where information is coherently hidden within a many-body quantum system. Using a quantum circuit-based scrambling operator, we scramble information in a seven-qubit system of trapped ion qubits.

While collecting the data published here, my labmates and I would calibrate our entangling operations once or twice an hour late into the night when the building temperature would stabilize and experimental drift seemed to slow down.  Quantum entanglement is not something we come across in our everyday lives. It's a strong correlation -- stronger than any classical correlation -- between the internal states of two particles that can be arbitrarily far apart. In that publication, we used upwards of fourteen different entangling operations to explore the spread of information via quantum scrambling.

In the limit of two particles, scrambling is similar to entanglement. For more than two particles, scrambling emerges as a process that transforms any arbitrary single-qubit state into a many-qubit entangled state, a definition that regular entangling gates cannot guarantee. This transformation is akin to coherently spreading incoming information throughout an entire quantum register. Black holes are thought to possibly behave similarly: incoming information becomes scrambled with every particle inside the black hole, and entangled even with particles previously emitted by the black hole. In this way, our system replicates quantum information processing by black holes on a very small scale. To enable this simulation, we leveraged our ability to generate entanglement to make scrambling.

To make entanglement we originally calculated sets of laser pulses that would generate an Ising interaction between two charged atoms, or ions. Next, we built a system that contains trapped ion qubits alongside all the lasers and optical elements necessary to sufficiently control the qubits. Building this experimental apparatus and demonstrating its abilities lead to a manuscript that appeared on the cover of a past edition of Nature, see figure. In that paper, we describe the novel experimental architecture we employ. Since the atoms are positively charged, we can trap them using oscillating electromagnetic fields in a device called an rf Paul trap buried within a ultra-high vacuum system. We use the gold-covered electrodes depicted in the figure to create the necessary fields that trap a chain of ions with roughly 5 micron separation. Next, tiny laser beams with a roughly two micrometer waist were focused over the ions, which allows us to coherently manipulate the ions’ internal states individually. Several other laser beams were also focused over the ion chain to keep the ions in specific electronic levels as well as to implement Doppler cooling and state-dependent fluorescence detection. In the end, we needed to develop working systems of optics, electronics, rf signals, and software to end up with a working experiment. Many people were involved: undergraduate students, graduate students, and postdoctoral researchers all contributing. 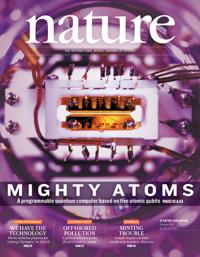 Once the system was built and operating, sets of laser pulses were designed using the Coulomb interaction between ions to affect the entangling gates. Ultimately, we ended up having a very stable experimental system that we have used to perform several exciting quantum computing experiments in the past years. Published examples can be found here, here, here, here, here, and here, and more are in the works.

This quantum scrambling algorithm, along with the others mentioned above and the different types of entangling gates we have performed, shows that the ion trap qubit is very a powerful candidate for large-scale quantum computers. So far, we have managed to perform entangling gates on chains of up to seventeen ions, a nice step forward for the the field (manuscript in prep). Each experiment required thorough planning, considerable analysis, and rf engineering. Beyond that, the system is completely universal. The crucial next steps will be growing beyond this seven-qubit proof of principle experiment. Efforts are already underway. 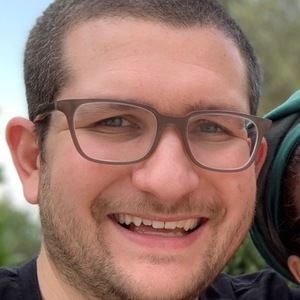