Researchers from the University of Strasbourg & CNRS (France), in collaboration with University College London (United Kingdom), and Humboldt University Berlin (Germany), have shown that a subtle combination of light-emitting semiconducting polymers and small photoswitchable molecules can be used to fabricate light-emitting organic transistors operating under optical remote control, paving the way to the next generation of multifunctional optoelectronic devices. These achievements have now been published in Nature Nanotechnology.
Paolo Samorì
Professor , University of Strasbourg
Follow
Like Liked by Gabriele Rainò and 2 others
0

A combination of light-emitting semiconductors and photochromic molecules enables the fabrication of optically switchable organic light-emitting transistors with tunable current and luminance.

Organic light-emitting transistors are widely recognized as key components in numerous optoelectronic applications. However, the integration of multiple functionalities into a single electronic device remains a grand challenge in this technological sector. Moreover, the next generation of displays requires to encode high-density visual information into single and ultra-small pixels.

Now a team of researchers from Strasbourg, London, and Berlin has taken a big step forward by creating the first organic light-emitting transistor that can be remote-controlled by light itself. They have been blending a custom-designed molecule as a miniaturized optical switch with a light-emitting semiconducting polymer. Upon illumination with ultraviolet and visible light, the molecular switch reversibly changes its electronic properties. As a consequence, the electrical and optical response of the device can be modulated simultaneously by light, which serves as an optical remote control.

However, having a device capable of producing only one color is not sufficient for daily-life applications, such as full-color displays. By choosing appropriate photoswitchable molecules and blending them with suitable light-emitting polymers, the researchers have demonstrated that this new type of organic light-emitting transistors can shine in the range of the three primary colors (red, green, and blue), thereby covering the entire visible spectrum.

The disruptive potential of such approach was demonstrated by writing and erasing spatially defined emitting patterns (a letter for example) within a single device with a beam of laser light, allowing a non-invasive and mask-free process, with a response time on the microsecond scale and a spatial resolution of a few micrometers, thus outperforming the best “retina” displays. Clearly, these findings represent a major breakthrough that offers multiple perspectives for smart displays, active optical memories, and light-controlled logic circuits.

An organic photodetector with a natural sense of rhythm

Boosting the electrical performance of 2D materials with molecular bridges

Graphene as a detective to unravel molecular self-assembly 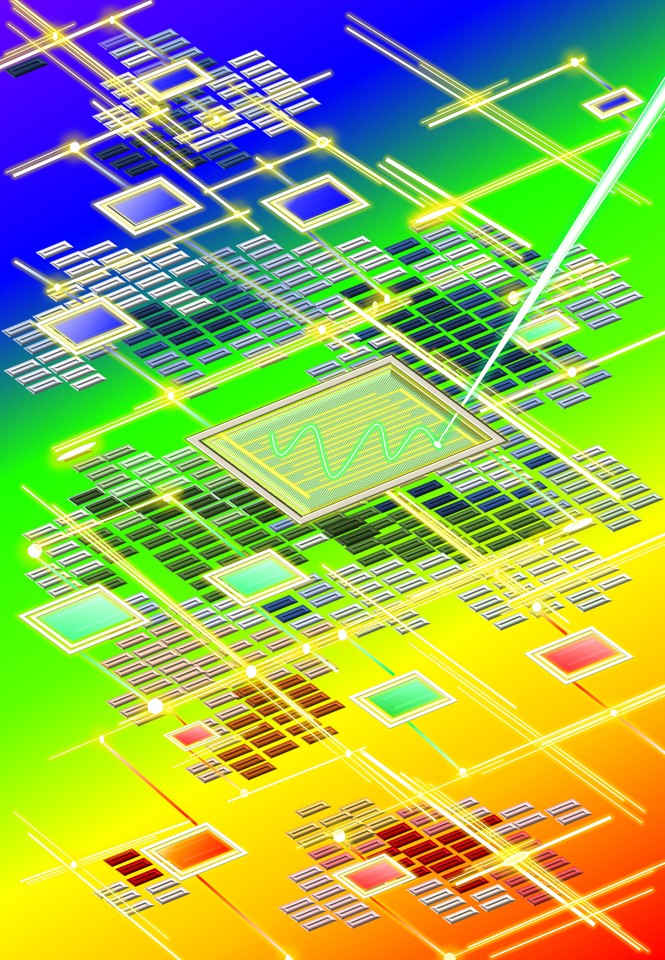 Researchers from the University of Strasbourg & CNRS (France), in collaboration with University College London (United Kingdom), and Humboldt University Berlin (Germany), have shown that a subtle combination of light-emitting semiconducting polymers and small photoswitchable molecules can be used to fabricate light-emitting organic transistors operating under optical remote control, paving the way to the next generation of multifunctional optoelectronic devices. These achievements have now been published in Nature Nanotechnology.