Organic–inorganic metal halide perovskite solar cells have been under the spotlight but what happens in the working solar cell device at the nanoscale remains elusive. Here Kim et al. show that light and voltage bias can induce strain and structural variation which may cause J–V scan hysteresis.

Organic-inorganic metal halide perovskites have gained considerable attention for next-generation photovoltaic cells due to rapid improvement in power conversion efficiencies. However, fundamental understanding of underlying mechanisms related to light and bias induced effects at the nanoscale is still required.

Particularly, devices fabricated using these materials still exhibit hysteresis in current and voltage (I-V) and transient characteristics which have been widely reported. It is observed that the sweeping voltage direction and the rate affect the I-V characteristics greatly. Although there have been numerous efforts to elucidate the underlying mechanisms to clarify the origin of the hysteretic behavior, experimental results often face challenges in interpretation. This is because the material typically shows a large amount of leakage current and dynamic movement of ionic defects, which can lead to artefacts and inconclusive results.

Our team (School of Materials Science and Engineering and School of Photovoltaic and Renewable and Engineering at UNSW) has been interested in fundamental properties of these materials, i.e., elucidating the origin of the I-V hysteresis. First, we fabricated highly efficient  mixed/metal halide perovskite in the form of (FAPbI3)85(MA-PbBr3)15 that is already reported from compositional engineering as one of the most effective solar cell materials. Second, complementary spatial nanoscale imaging techniques are used, specifically Piezoresponse Force Microscopy (PFM), Kelvin Probe Force Microscopy (KPFM), and Atomic Force Microscopy (AFM) to identify structural variations of metal halide perovskites under varying illumination and bias conditions. Here, nanoscale ferroelastic domains are identified using PFM measurements. In-situ temperature dependent topography measurements confirm that the domains disappear and reappear at the phase transition temperature. These domains have a strong dependency on external light and electrical bias. Structural appearance of domains is also observed in 3D topography maps. Furthermore, the effect of bias voltage is observed by applying a voltages to the tip during the PFM measurement. Upon applying positive bias voltages, strong domain patterns appear in both phase and amplitude maps with enhanced amplitude signal. The domains distinctly emerge structurally which is confirmed by a 3D topography map. However, upon applying negative bias voltages, domains are no longer observed structurally, rather, migration of organic cations dominates and causes damage to the surface. Third, peak broadening analysis from in-situ XRD measurements reveals increase of structural disorder under applied external stimuli, i.e. light and electrical bias which is linked to the appearance of the domains. Lastly, we show evidence and propose a mechanism describing how the observed structural changes can influence charge carrier transport and the I-V hysteresis in actual solar cell devices.

We believe that these results provide further understanding of the effects of nanoscale structural variations in solar cell operation and for improving the design of halide perovskite photovoltaic devices. 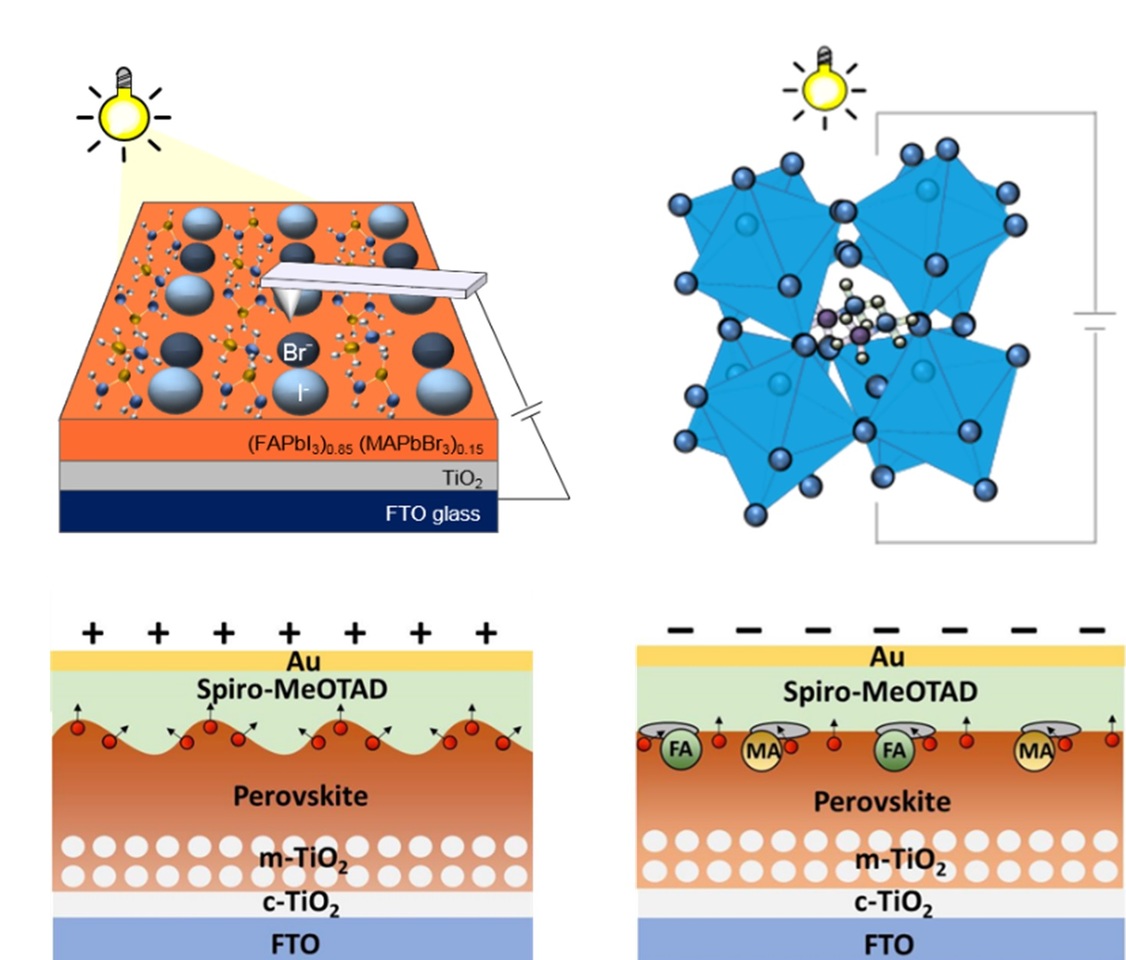