Researchers have shown that hybrid organic-inorganic trihalide perovskites are not only aimed to be used in solar cell applications, but also pursue many other fundamental research directions. Our paper reports the first spin-optoelectronic devices using these solution processed materials, and studies their fundamental spin-dependent physical behavior; launching a new field of hybrid organic-inorganic trihalide perovskites spintronics.
Dali Sun
Assistant Professor, North Carolina State University
Follow
Like Be the first to like this
0

There is presently intense research interest in hybrid organic-inorganic perovskites (or organometal trihalide perovskites, OITP) for photovoltaics and other optoelectronic applications. Hundreds of scientists work in this field, and conferences devoted to these materials have been organized all over the world. Although there has been a tremendous advance in the power conversion efficiency of solar cells based on the OITP compounds, the understanding of the photophysics and especially the spin-related properties of spin-carrying excitations is lacking. These properties are important because they play a major role in the processes of carrier photogeneration and carrier transport, which are the corner stone’s of photovoltaic applications, as well as in other optoelectronic applications. In addition the spin degree of freedom has not been utilized in devices based on the hybrid perovskites, although large spin-orbit coupling is anticipated due to the heavy Pb atoms in the OITP building blocks. In particular, spin injection, transport and manipulation have not been demonstrated in devices based on the hybrid perovskites.

These outstanding OITP films may be grown at room temperature from solution which may be exploited for low-temperature solution processable spintronic device fabrication. The OITP have enormous chemical versatility for both the anion and cation, using different synthesis routes. In contrast, the growth of the more conventional semiconductors (such as GaAs, Ge, Si) need be done at temperatures much higher than room temperature, requires extremely purified crystal compositions, and complicated device fabrication process for spintronics and electronics applications.

Our team has worked on the exploration of spin injection and spin dynamics in organic semiconductors (such as p-conjugated polymers, fullerenes and nanotubes), as well as inorganic semiconductors (such as a-Si:H) in the form of crystallites and thin films. We are thus in a perfect position to investigate the spin-related properties of hybrid organic-inorganic semiconductors, since we are familiar with both organic and inorganic semiconductors. Whereas the concept of OITP spintronics had been initially presented in 2016 (Please see the abstracts of talks presented in the 2016 March APS meeting in Baltimore, where an entire focused session section was devoted to Perovskite Spintronics, https://meetings.aps.org/Meeting/MAR16/Session/X8), our current work is the first experimental demonstration of hybrid perovskite spintronics device applications. This opens up a new avenue in a field that has already attracted great attention in the research community.

In the present work, we have succeeded in fabricating two prototype spin-related optoelectronic devices, namely the spin light-emitting diodes (spin-LED) and spin-valves based on MAPbBr3 with various morphologies, in which we demonstrate spin-aligned carrier injection into the perovskite interlayers using the circularly polarized electroluminescence and giant-magnetoresistance (GMR) technique. This assignment is strongly supported by our measurements of the optical and electrical Hanle effects, which are the hallmark of spin alignment in and spin transport through the perovskite interlayer. Surprisingly, from both Hanle effect responses we measured a long spin  relaxation time for the spin polarized carriers and excitons in MAPbBr3 that is similar in magnitude to that in graphene, although the spin-orbit coupling in the perovskites is much stronger than in graphene. The explanation of this discovery may be a puzzle that need be thoroughly understood. In the meantime, this adds to the miraculous properties of the hybrid perovskites that make them very attractive for spintronics and spin-optoelectronic applications. On the one hand the large spin-orbit coupling in MAPbBr3 is an imperative property that allows spin manipulation; and, on the other hand, the spin lifetime is sufficiently long to allow spin manipulation. Indeed an unusual compound with promising applications and underlying science. We also note that the OITP compounds contain both organic and inorganic components, and thus they do not belong to any previous class of materials that show potential optoelectronics and spintronics applications. Therefore our studies open a new class of materials for spintronics applications. 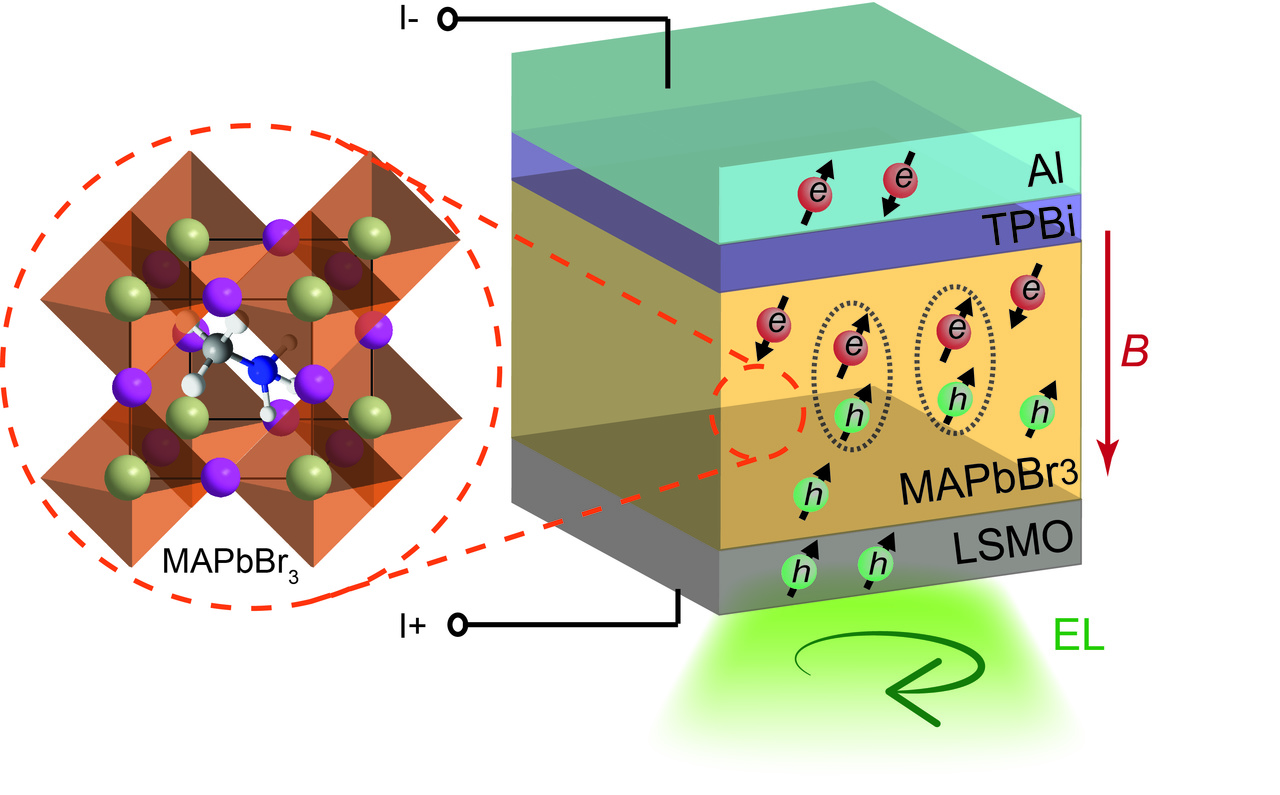 Researchers have shown that hybrid organic-inorganic trihalide perovskites are not only aimed to be used in solar cell applications, but also pursue many other fundamental research directions. Our paper reports the first spin-optoelectronic devices using these solution processed materials, and studies their fundamental spin-dependent physical behavior; launching a new field of hybrid organic-inorganic trihalide perovskites spintronics.