Nanocardboard: How to build microplates that don't act like what they're made of

By microstructuring nanometer thick films of aluminum oxide, we have a developed new plate mechanical metamaterial that is many 1000s of times stiffer than similarly dense solid plates. While the development process wasn't straight forward, this research plots a new path towards engineering microscale structures with mechanical properties that are independent from what they're made of.
Sam Nicaise
Postdoctoral researcher, University of Pennsylvania
Follow
Like Liked by Jon Links
0

While structural components are commonly made of solid materials, it is often possible to achieve similar or better performance by removing material – that is creating a hollow structure which is a composite of solid material and free space. The sandwich structure is a prime example of this composite in which two planar face sheets are rigidly separated by a spanning core or webbing. The distance between the stiff face sheets provides a large area moment of inertia, and thus bending stiffness, while the sparse core provides reduced density. An important macroscale example is paper cardboard, which turns a solid, yet floppy, piece of paper into a functional plate. Another example is honeycomb-fiberglass composites, which are used widely in airplane construction.

At the microscale, engineers have more limited options for microstructures that take advantage of free space. Recently, researchers have started to design trussed bulk mechanical metamaterials that use free space to achieve unprecedented mechanical properties at ultra-low densities. Though, our group at the University of Pennsylvania recognized a gap: the properties of many important “planar” microscale components, e.g., cantilevers, plates, or membranes, were still married to the innate properties of solid materials. Therefore, by redesigning microplates in the form of a hollow sandwich structure with micrometer height and nanometer sheet thickness, we could divorce the component properties from those of a constitutive material. With a touch of humor, we called our structure nanocardboard.

At first, the fabrication of nanocardboard was easier said than done. Luckily, we connected with a team of scientists through the Singh Center for Nanotechnology at the University of Pennsylvania. They were designing a silicon microplate for an unrelated medical application –filtering cancer cells from blood. Their microplate filters turned out to be the perfect proof-of-concept molds for our sandwich structure. This collaboration is an example of how innovations in one area facilitate innovation in other areas through the cross-pollination of researchers.

With the initial designs in hand, we proceeded to fabricate dozens of 10-50 micron tall nanocardboard plates. The blood-filter-based structure was quite stiff initially, as evident from our experimental testing and finite-element numerical modeling. Though when we tested plates with increasingly thinner face sheets, from 400 nm to below 100 nm, we started to observe irreproducible results in the experimental bending tests. We had run into a classic issue with sandwich structures – face sheet wrinkling. After taking a closer look, we found that the wrinkles had formed across the face sheets in many different directions and locations. The sporadic results occurred because the wrinkles were moving and reorienting during each test.

To eliminate wrinkling, the initial webbing pattern was replaced with a square basket weave pattern such that any wrinkle would be stopped by intersecting a webbing unit. While we also considered a large variety of other webbing motifs, the square basket weave was the simplest and stiffest design that also prevented wrinkles. Interestingly, we looked at some of the most studied aperiodic tilings of dots, though found that they did not provide the right density of webbing units to break up potential wrinkles.

While there were few previous examples of man-made microscale sandwich structures, a handful of examples exist in nature. Wood and bones are examples of cellular architectures that use sparse structural walls to build stiff and light materials. Some leaf and bone varieties resemble sandwich structures (see the iris leaf micrograph) with more dense superficial layers and less dense cores. Interestingly, DNA resembles a much smaller version of a sandwich structure, with the double-helical backbones similar to the face sheets and the bonded pairs similar to the disconnected webbing. This example is precisely how our collaborators, Dr. Prashant Purohit and his student at the University of Pennsylvania, developed a theoretical model for nanocardboard. We found that the model accurately matched the relationship between geometry and bending properties that we observed in experiments and numerical simulations.

We are very interested in applications that take advantage of these extremely stiff and light weight microplates. While our plates were made of stiff aluminum oxide, nanocardboard could alternatively be made from almost any other material and still the mechanical, thermal and electrical properties at the micro to macroscale would be largely dependent on the geometry. One of our recent investigations has been in developing hollow cantilever resonators with resonance frequencies that are comparable to similar solid cantilevers. Another investigation has used nanocardboard as a structural component in microflyers where engineers desire low weight and high stiffness. 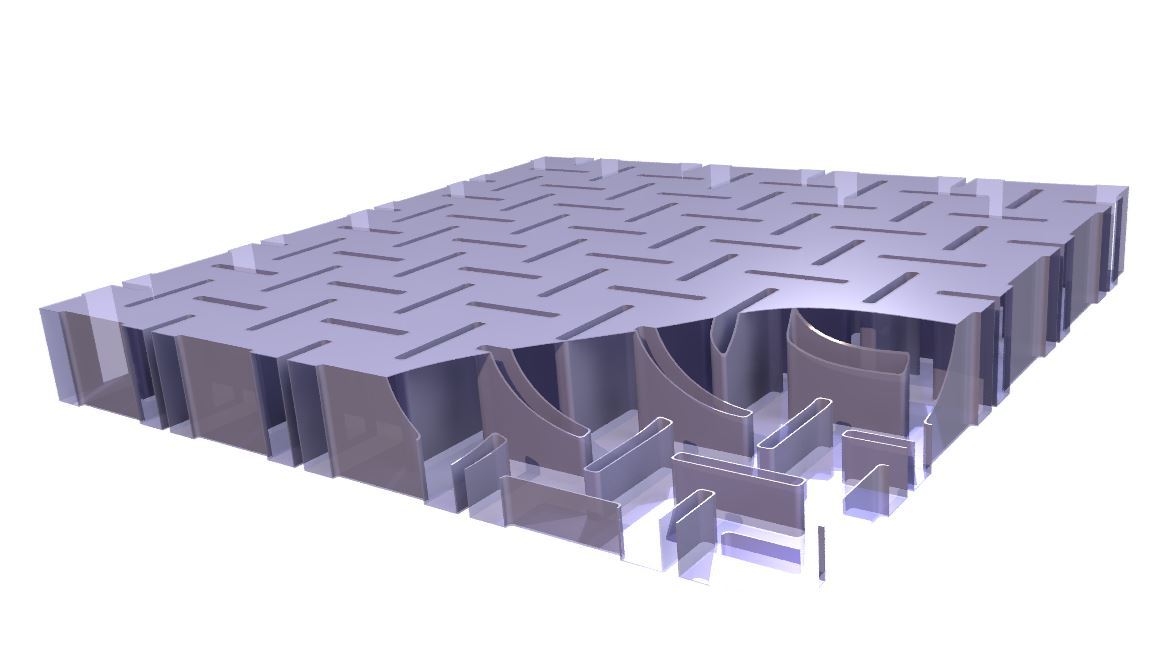 Nanocardboard: How to build microplates that don't act like what they're made of

By microstructuring nanometer thick films of aluminum oxide, we have a developed new plate mechanical metamaterial that is many 1000s of times stiffer than similarly dense solid plates. While the development process wasn't straight forward, this research plots a new path towards engineering microscale structures with mechanical properties that are independent from what they're made of.