An associated article published in Nature Communications can be found here: https://www.nature.com/articles/s41467-018-04452-w

In 1969, Leon Chua published a 949 page textbook entitled “Introduction to Nonlinear Network Theory” that has become a collector’s item, primarily because it is acknowledged as a classic pioneering work but it quickly went out of print since it received little readership and less application.  Chua’s goal was to provide the general principles for which any type of nonlinear dynamical electronic device could be modeled within a circuit independent of the physical principles behind the operation of the new circuit element.  For that reason, the book was largely a dense collection of mathematical theorems, proofs and simple analytical models that were intended to illustrate general principles.  Since there was relatively little connection to familiar device physics and practical systems that most practicing electrical engineers could utilize immediately, it was not widely adopted and largely forgotten.  However, for those intrepid enough to tackle the tome, it provides a wealth of insights that are becoming increasingly relevant today as the shrinking of semiconductor devices to the nanoscale is making them increasingly nonlinear and understanding the realm of brain neurocircuitry requires a strong background in dynamical systems.

Reading the textbook, it is actually easy to understand how and why Chua was able to conceptualize the memristor, which he introduced explicitly in his 1971 paper “Memristor – the missing circuit element”.  However, for whatever reason it was not until ten years ago this month that our group published a paper rather cheekily entitled “The missing memristor found”, which was intended to be a jest since the evidence for the existence of physical memristors had been around for many decades – it was just that no one had previously connected Chua’s mathematical formalism to a physical mechanism that implemented it.  In the meantime, research on memristors has exploded, with over 15,000 research articles explicitly containing the word over the past decade (fewer than ten had been published in the previous 37 years).  As a community, we have realized that previously known electrical devices with such names as ReRAM, PCRAM, STT-RAM and many others are all described within the memristor formalism, and that the applications of such devices have expanded from simple nonvolatile memories to actual computation, ranging from performing Boolean logic to analog linear algebra and emulation of synapses and neurons in various types of brain-inspired networks.

In a parallel and seemingly unrelated set of developments, instabilities in certain electronic devices, for example the negative differential resistance (NDR) in Mott insulators such as NbO2 and a wide variety of other systems, have been observed and discussed for well over half a century.  How an electronic component behaves when operated in an unstable region, if that is even possible, has been a strongly debated topic since Brian K. Ridley proposed in 1963 the decomposition via entropy-production maximization of the total current or voltage in a device into coexisting physical domains with different current densities or electric fields, depending on the nature of the NDR.  Rolf Landauer joined the debate with the notion that Ridley’s ‘decomposition’ was more likely to be driven by minimization of heat or internal energy in the device, and if that were the case then a complete description of the steady state behavior of a circuit element under bias would require the explicit minimization or maximization of some thermodynamic property of the device.  However, there has not been much exploration of this idea, since standard semiconductor device simulators just integrate coupled electrical and thermal field equations and their associated continuity conditions to determine a net current-voltage behavior.  Iterating such solutions via a Monte Carlo or molecular-dynamics-type search to find a minimum in a thermodynamic function would require a huge amount of computation and does not have a precedent in the device modeling community.

In our group, we have understood that the current controlled or ‘S’-type NDR observed for NbO2 can also be modeled by the memristor mathematical formalism, and in fact we coined the term ‘Mott memristor’ for the threshold switch behavior that we and others have observed.  This potential connection between electronic instabilities and memristors posed a challenge in that the standard approach in circuit theory mainly utilizes ‘lumped’ circuit element models that ignore anything that is not directly measurable with a clock and voltmeter or ammeter.  Since the physical dimension of a device is not considered, the concepts of a current density or an electric field are not present in the models. Thus, when a device is biased at an unstable steady state, a standard circuit-theoretic memristor model will predict that the state of the device will jump spontaneously to one or another neighboring homogeneous stable steady states if it experiences a slight perturbation.  However, Ridley’s decompositions offer a different alternative, i.e. a nonlinear device biased at unstable steady state (which could be reached via a transient time response) could become stable via a symmetry-breaking process if the current in the device split into two coexisting domains with different densities representative of the neighboring stable steady states (or the voltage split into two coexisting electric fields).  This process is similar in concept to a spinodal decomposition of an initially uniform fluid into a mixture of two physically different fluids or to a disproportionation of a chemical compound into two different compounds.

In order to continue to access the computational simplicity of the memristor model, we had to augment it with the notion of an active volume that could contain different current densities and/or fields.  This added at least one new parameter to the model (or potentially a new state variable), but the end result provided a straight forward way in which to understand what had been some puzzling experimental results.  We found that the ‘Chua corsage’ current-voltage characteristic for a purely hypothetical device that was mathematically defined to illustrate concepts of local activity and transitions to chaos actually had a physical realization in the properly measured Mott transitions in VO2 and NbO2.  Using the concept of a dynamical route map from circuit theory, we were able to chart the stable and unstable steady states of the Mott memristors, and then show that indeed the decomposed states calculated from the augmented memristor model had a lower internal energy (enthalpy) than the corresponding unstable states, even though the input power and heat released were identical, verifying Landauer’s hypothesis.

Thus there is a thermodynamic distinction between the decomposed and unstable electronic configurations, namely their internal energy. From this, we made the following interesting observations that tie together many research results:

The poster image in the background of the title is a direct temperature mapping of the process of fluctuations driving the formation of several domains of different current densities when a S-type NDR device was operated in an unstable region. 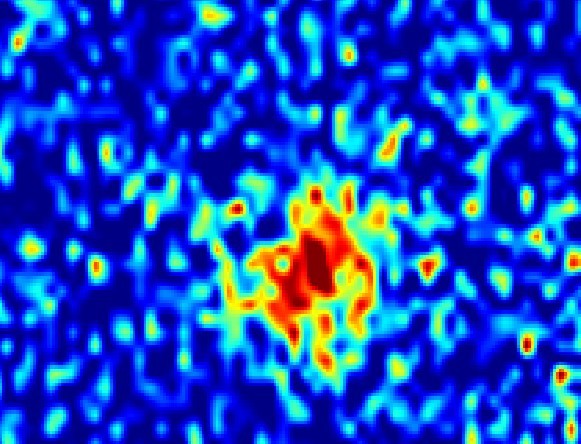