Electrochromic (EC) materials show great promise as one of the key functional components in future internet-of-things (IoT) applications such as flexible/3D displays, optical camouflage, smart windows, and smart sensor systems. However, realizing flexible EC devices with high energy-efficiency and fast switching speed is fundamentally challenging, mainly because both the EC performance and the mechanical properties are non-trivially correlated with the nanoscale formations and the conductivity of both the EC materials and the transparent electrical conductors.

Owing to the unique optical and electrical properties, two-dimensional (2D) transition metal carbides, nitrides, and carbonitrides (referred to as MXenes) and their derivatives have demonstrated their potential application in energy storage, catalysis and electronics. And the production of 2D nanosheets of both MXenes and their derivatives can be scalable in liquid phase, making it easy for constructing self-assembled films and hybrid structures, thus suitable for electronic devices on a large scale.

Our group at Boston University has a long-standing commitment to synthesizing novel functional inorganic and organic 2D materials & hybrid structures. And we have a great honor to collaborate with Hongzhi Wang group at Donghua University in China, who have been researching EC devices for a long time, and Yuxuan Lin et al. in Tomás Palacios group at MIT, who are experts on electrical engineering of materials. We successfully assemble titanium-based MXene Ti3C2Tx (T = O, OH or F) and the derived TiO2 nanosheets into uniform nanometer-thick films at a liquid-liquid interface, and fabricate EC devices based on the TiO2/Ti3C2Tx heterostructures on a flexible substrate (Figure 1a). The obtained EC devices exhibit both excellent electrochromic properties and mechanical properties by making the common EC materials into two-dimensional monolayers (Figure 1b).

Figure 1. (a) Schematic diagram of the flexible solid EC device; (b) Schematic of the pathways of electron conduction and ion diffusion within the self-assembled TiO2 thin film.

In the first step, we need to prepare the MXenes and 2D TiO2 IPA dispersions, which is not easy. Anatase phase TiO2flakes obtained by direct temperature conversion of Ti3C2Tx liquid gel cannot be dispersed in solution. To solve this problem, we converted Ti3C2Tx aqueous solution into aerogel by freeze-drying to keep its loose and porous structure before high-temperature conversion. When applying the conversion to the Ti3C2Tx aerogels, remained morphology is observed after annealing at 400 ℃ to convert it to TiO2. This result suggests that the conversion reaction is confined to initial 2D Ti3C2Tx flakes, leading to the good separation of each flake in the skeleton of aerogels during the conversion process.

Because of the uniform thickness distributions and the high coverage, the self-assembled Ti3C2Tx films show both high optical transparency and high electrical conductance, making them ideal for the transparent electrodes of EC devices. The sheet resistance (Rs) value of the LLIA Ti3C2Tx film reaches 1623 Ω sq-1 at a transmittance of 96.9%, 210 Ω sq-1 at 94.1%, and 123 Ω sq-1 at 87.8%. Comparing the resistances of materials with the similar transparency, our values are lower than MXene films made by other methods like spin coating (201 Ω sq−1 at 87%), dip coating (4300 Ω sq−1 at 94%), and spray coating (7974 Ω sq-1 at 82%), and also lower than other transparent conductive materials such as graphene, and reduced graphene oxide. Similar to Ti3C2Tx, TiO2 flakes in the self-assembled film also connect with each other well to form a porous network, with the pore size in the range of nanometers.

Figure 2. Schematic diagram of the flexible solid EC device. As-prepared solid EC device with an A4 paper size (about 20 cm×30 cm) is triggered in bending state and attached on a window.

Moreover, the flexible TiO2/Ti3C2Tx heterostructure electrodes are fabricated by transferring self-assembled TiO2films on the Ti3C2Tx/PET substrates, providing a metal-semiconductor junction between them. When contacting with TiO2 (work function ~4.2 eV), the Schottky barrier between Ti3C2Tx and TiO2 is much lower or it could even be an Ohmic contact, compared to that between ITO and TiO2. Thus, the electron transport between the Ti3C2Tx and the TiO2layer is expected to be improved in the heterostructure.

As a proof-of-concept demonstration, benefit from the improved ion diffusion and electron conductivity in assembled single-flake-layer TiO2 film, and the 2D nature of both the MXene electrode and the TiO2 EC layer (Figure 1b), our devices are among the best flexible EC devices with the fastest coloration speed, the highest coloration efficiency and superior electrochemical stability. Finally, a large-area flexible EC device (30 cm×20 cm) was prepared (Figure 2), which can be an example for practical large-area applications and paving the way for integrating EC devices to next-generation flexible and wearable electronics.

We think the high quality TiO2 crystals over micrometer large area with nanometer thin thicknesses is the key for the high-performance EC devices enabled by self-assembled 2D TiO2/MXene heterostructures. Nevertheless, the chemical conversion mechnism from Ti3C2Tx to 2D TiO2 is not completely clear, but very interesting, and requires further investigation. Also, whether this approach can be applied to make the 2D version of other EC metal oxides and EC devices with multiple functions, will be explored in our future studies. 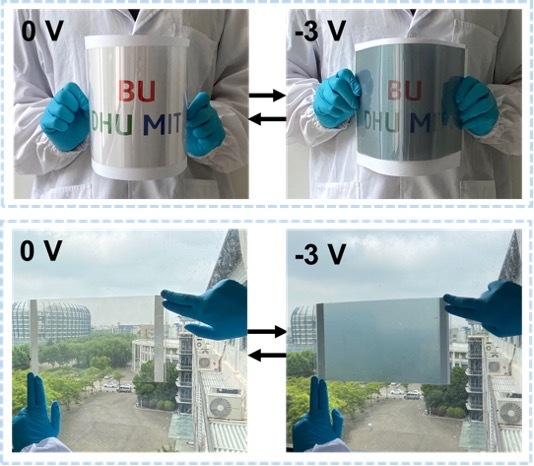